Consumer Cellular offers a variety of today’s most popular cell phones and wireless devices but without the contracts that many major carriers have along with low-cost outright purchase prices and plans. Talk plans start at just $10 per month and go up to $50 for unlimited minutes nationwide. Text and data plans are also affordable, starting at just $2.50 and going up to $40 for unlimited texts and 4GB of web data. The company offers an AARP discount and features an affordable emergency call product that can prove crucial in times of emergency, which even has the ability to detect falls.

Check out my analysis below on the company’s main products to help in determining which fit your needs best. Whether you’re just looking for something to be able to make calls with or you want to have the latest technology, Consumer Cellular has an option for you and with some of the most affordable and unrestricted pricing options around. 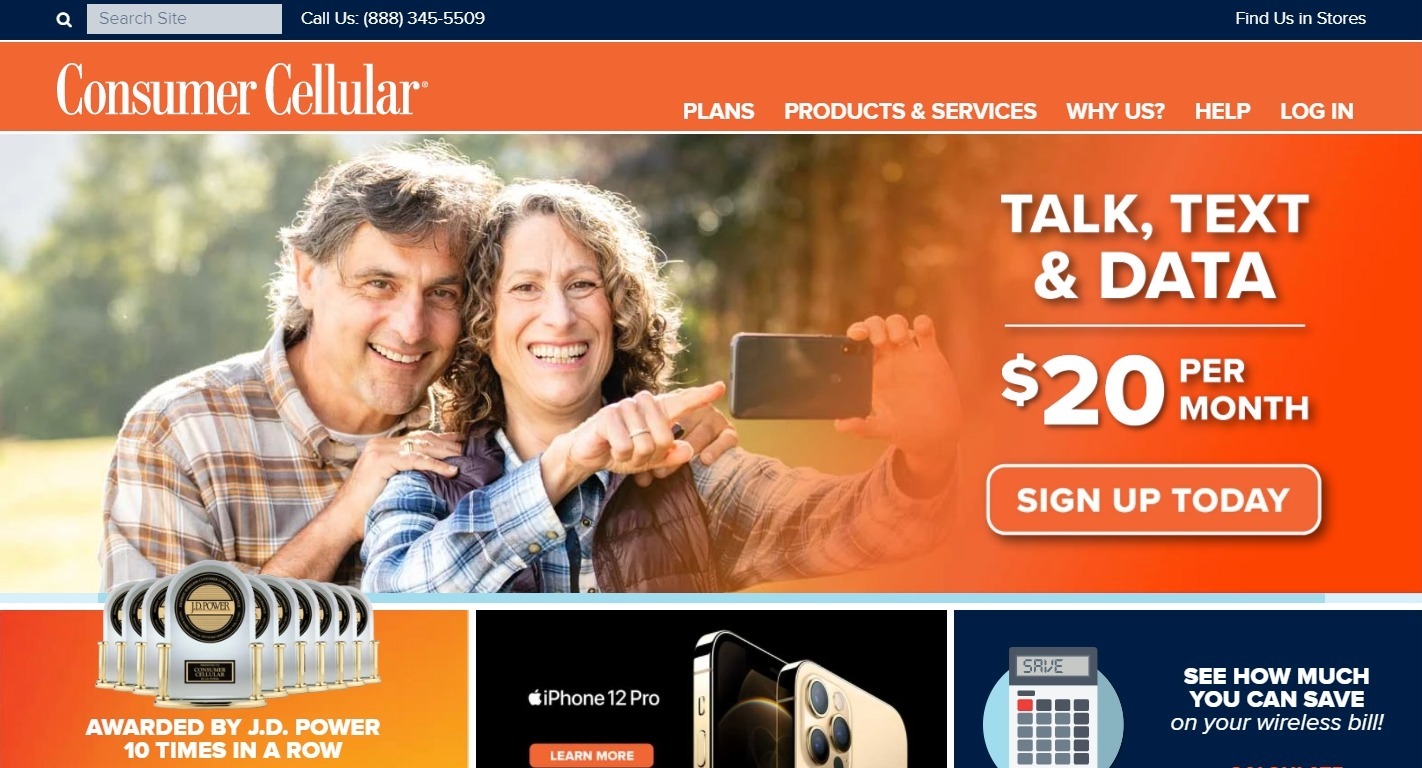 Flip phones from the company come in two options, costing just $30 and $50. Flip phones provide a more durable cell phone option than most smartphones, however, they are limited in that they don’t have keyboard capability and most apps aren’t designed for them.

They are primarily good for sending and receiving calls, along with simple text messages. Both models do have cameras and Internet access, with an MP3 player on the $30 model and a video camera on the $50 model. Their simplicity can prove to be either a downfall or benefit, depending on the needs of the consumer.

To compensate for the high cost of the Apple iPhone, Consumer Cellular has allowed for an Easy Pay option with each of the six models of iPhone that it carries. This allows consumers to purchase an iPhone with between $35 and $150 down and then between five and 24 $25 payments each month, depending on the model. The best thing about the iPhone is the way that most applications are designed with it first in mind. Especially if you may need to use cell phone applications for professional work, the iPhone is a great option.

If you want application capability but more for personal life use, an Android smartphone can be a logical and more economical option than the Apple iPhone. While most applications will work on them, ease of use with apps may lag behind that of the iPhone, making them adequate for app use on a more personal level but not necessarily if you need to be able to use apps for professional purposes, like social media advertising.

They’re much cheaper on Consumer Cellular than the iPhone, with all coming in under $150 outright aside from the Doro 824 SmartEasy, which costs $50 and has the option for $25 per month EasyPay over a period of six months.

Tablets tend to act as a hybrid between a cell phone and a laptop computer. Because of their portability and ease of use, they are most often purchased for convenience by people that also have both cell phones and computers. Consumer Cellular offers an affordable tablet option for $50 upfront with an EasyPay of $25 per month for six months.

With a $200 total cost, that is less expensive than many tablets on the market today, many of which cost around $500. This product features a touchscreen display, front and rear cameras, and fast download speeds. Along with convenience, tablet screen size can make cell phone applications not available on computers but accessible through tablet more enjoyable.

The Consumer Cellular Ally is a great option for someone at risk of emergency, such as a fall. It’s a personal emergency response device priced at $150 which looks similar to a closed flip phone. With the push of one button on it, help can be summoned.

It can also detect falls and through the use of its GPS locator determine where its user is and send help without any action necessary. Its speaker allows for the monitoring center to contact the user and speak to them hands-free. It features a 36-hour battery life, giving it ample juice to get through each day, and can be worn around a person’s neck with an included necklace holder.

Offered free, this card allows consumers to obtain Consumer Cellular’s affordable service with their own cell phone that is either a Consumer Cellular phone, a phone previously used with AT&T or T‑Mobile, or an unlocked GSM phone.

It has no activation fee. Many companies will charge to get an outside cell phone going with their service and don’t have the low plan pricing that Consumer Cellular does, making it a good option for someone that has an applicable cell Phone not under contract with another company.

At just $80 outright, about half the cost of many mobile hotspots, this product from Consumer Cellular can be an affordable way to take reliable Internet access with you on the go.

It features the ability to connect with up to 10 cell phones, laptops or tablets, with a 13-hour battery life for one device and about an eight-hour life with multiple devices. You can connect your data plan to it for just $10 per month.

This represents a great option for someone with Consumer Cellular cell phone service and a landline with another company. For $50 outright and then $10 per month, your landline can be made into an extra line on your cell phone plan, likely resulting in big savings. Consumer Cellular allows for you to keep your existing phone number or get a new one. And as a big plus, the device is portable, meaning that you can take your home phone service with you when leaving the house if you’d like. That can come in very handy for extended periods of travel, should you be expecting an important call on the landline.